skip to main | skip to sidebar

The Night I Almost Went To Hell

Some time ago I had a dream. No not a dream, a nightmare. It scared the hell out of me so much that I couldn’t even write it down because I was too scared to think about it. I wish I had written it down because it was the most detailed account of what hell must be like that I could have imagined. Here’s a brief description of it:

In my dream, it was me against three demons. I’m not sure what they were but I knew for sure in my dream that they represented hell. I was standing in the backyard of someone’s house, a friend maybe but that was never really established in my dream. It wasn’t my house, that’s all I know. I was facing the fence shared by the neighbor. On the other side of the fence were the three demons.

How can I explain these demons? My trouble in explaining them comes from the fact that I can’t explain the depth of hatred that they had for me well enough. These demons had so much hatred for me that they blasted their hatred on me like a megaphone would blast sound if it were next to your ear. I felt so much fear that my throat held no voice to scream. I felt the inside of my body trying to run while the outside of my stayed to fight. And God, the smell, the smell of hatred…oh, yes, there is a smell that is indescribable! The smell of hell and hatred is so wretchedly sour, so strong that it burns your eyes and your nose, and grips your throat like two hands choking you with such force as intended to suffocate you, break your neck, pulling the flesh from your spinal cord and draining the life from your body.

The demons were so ugly that calling them demons sounds silly to me, like there should be a name for them that is so much worse, so much more descriptive than demon. They were tall and their skin was hard. Their heads were large. Their teeth were sharp and dripped with a sort of vomit colored liquid that never stopped running out of their hot, steamy mouths. God they hated me. I could feel how much they hated me. That was the scariest part. Feeling the hatred come over me like a thousand thick blankets trying to mop up the clean air around me and saturate my surroundings with hatred.

In my dream, I seemed to have two goals. The first was that I had to somehow find my words because I knew that I couldn’t fight them physically. I knew that I somehow had to find the words “Jesus is Lord”. Now, for those of you who know me, you know that yes, I am a believer…but that is not a sentence that you would hear being yelled from my lips on a regular day. Ha ha. But for some reason, I knew in my dream that that statement was my only defense. The second goal was to not let them over the fence because somehow I knew that the amount of hatred they had for me enabled them to throw my body with such force, such strength, such speed that my flesh would literally rip, stretch and burn from my bones and turn to liquid.

that's rough... i had a weird nightmare last night... don't even want to think about it, so i know exactly how you're feeling... totally creeped me out!

Why do you think we don't remember things exactly the way we 'lived' them in the dream? :) I think it is merciful. You don't think it is the Harry Potter books do you?

By the way, I see your reading list - take a peak at this :)

Wishing you and yours in snowy Colorado a wonderful and blessed new year!

I just posted About Me
Just click, if you want to know me better ^_^;;

Michelle, I think your demons hated you so much because you represent so much good that they can't fight. You do good things, think good thoughts and challenge others to do the same. The demons are threatened by you. They want to destroy you because you are a challenger to what they want to accomplish. I've never had a dream like that. I'm not enough of a threat.
Kat

Just been hiding out for a bit...coming back slowly.

Hey, I am liking your idea! I was starting to wonder if they knew something I didn't know. But hopefully you are right!

I've had a couple of nightmares myself where when I wake up it takes me a few minutes to realize that I was just dreaming. I agree with one comment 'the demons are threatened by you.' Don't be scared to go back to sleep, you seem like such a strong individual.

By the way, thanks for leaving the comment about Lawyer-Guy. So many people think I did go up to the suite with him.

I wanted to wish you a safe and Happy New Year. May 2008 be joyous and filled with love for you and your loved one.

Love your name by the way! No, definitely not the HP books. This nightmare happened about 9 months ago. I only just read the books this past month. I agree with your comment about it being merciful. Thanks for the link. I will check it out.

I'm glad you got my comment about LG. I would have not thought any less of you had you gone upstairs...but I have been reading very intuitively into your writing and can tell that you like more control than that (as mentioned).

Oh my absolute GOD, what did you eat before bed? Because I'm tossing whatever it was from my house! And I thought my dream last night about my husband sticking a screwdriver into an electrical outlet was bizarro!

Hey, sweetie. WOW! What a horrible experience. I'm wondering what, around that time, was threatening your safety, or the safety or wellbeing of someone you love.

And I totally agree that your light and love would be a threat to all demondom, and the fact that you KNOW that you can call on God to save you makes them even weaker!

Stay strong, both in character and faith. 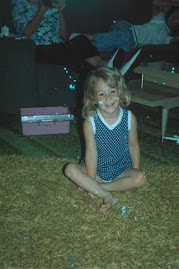 (no that's not grass, its a shag rug)

93 Oddities & Tidbits About Me

1. I'm 5'4" if I stand up straight
2. I like ribbons and shiny things
3. I like shoes, feet and toes...all shapes and sizes
4. I love my family and need to show it more
5. I love a good glass of wine
6. I love cold bottled beer
7. I have neat kids
8. I have a cat and two dogs
9. I like to sing but am the WORST singer
10. I like to clean house but hate "picking up"
11. I have a bad memory but I love history
12. I love to spend time with older people
13. I enjoy antiques
14. I love to read
15. I'm a libra
16. I still have made up words in my head from my childhood
17. I touch and smell everything when I shop
18. I haven't eaten a steak or a hamburger since 1987
19. I had my tattoo removed in 2007
20. I get lost driving sometimes
21. I've never smoke cigarettes
22. I love wildflowers more than roses
23. I have had a stuffed monkey on my bed for 39 years
24. I wore braces
25. I'm still best friends with my first boyfriend
26. I was a cheerleader in highschool
27. I want to donate my organs
28. I made time capsules as a kid and burried them in my garden
29. I've been accused of wearing false eyelashes, they are long
30. I love Patsy Cline
31. I was in labor with my first daughter for 19 hours
32. I once chased a man not wearing any shorts for 3 blocks
33. I once ambushed a man writing graffitti on my office window
34. I caught my first fish before I was 2 years old
35. I'm in the Guiness Book of World Records
36. I once owned enough shoes to fill 3 large Hefty trash bags
37. I love the Antique Road Show and dream of being on it
38. I have awesome friendships, many that span the course of 25+ years
39. I think perfume and incense should be used sparingly
40. I use to ride my skateboard better than all the boys
41. I wonder why grown women continue to wear overalls
42. I love taking pictures of people and nature
43. I was never the same after watching Life is Beautiful or reading Left To Tell
44. I love cultural celebrations and enjoy learning about and participating in cultures other than my own
45. I have dreams that come true
46. I've had premonitions of my own death
47. I took tap, ballet, jazz, modern dance and gymnastics
48. I was a Brownie and a Girl Scout
49. I've had my car stolen once and broken into 3 times
50. I want to write a book
51. I ran two half marathons
52. I ran 6 Bolder Boulders
53. I love Colorado
54. I like chick bands
55. I love gardening
56. I love God and think about him a lot
57. I own a massage table and massage chair and give incredible massages
58. I'm afraid I might die alone
59. I have a hot husband
60. I love authentic Mexican food
61. I'm still learning how to set boundaries in life and that it's okay to say no to people
62. I had a crush on my school principal, Mr. Schneider, when I was in kindergarten
63. I'm getting better
64. I'm still friends with my best friend from 4th grade
65. I've never been fired from a job
66. I am sometimes paralyzed by fear
67. I wish I was better at everything
68. I like the smell of library books and rain on a hot sidewalk
69. I am afraid of horses
70. I often get church laughter (but not at church)
71. I once wore my jeans inside out to school and let people write on my pants
72. I have one sister
73. I have firefighting parents
74. I'm afraid to get on a bus since the Great Yellow School Bus Debacle of 1976
75. I have perfect ears (jealous?)
76. I made fun of a girl in 4th grade and I still feel guilty
77. I never have plaque (so my hygenist says)
78. I love little surprises of any kind
79. I once beat up a girl 3 years older than me with my book bag because she called me names every single day after school...she stopped...I'm still in therapy
80. I have a weird feeling that I am supposed to have 3 kids even though I scheduled my husband's vasectomy and made him go and I never want to be pregnant again
81. I often volunteer for tasks or jobs I have no clue how to perform...I work best under pressure
82. I have a king-size bed but sleep on the edge
83. I get dressed in the same order every day, undies (bottom then top), socks (left then right), pants, and then shirt
84. I was in the puppet club growing up and love watching puppeteers and listening to story tellers
85. I was born in California...lived there for 10 years
86. I don't like shopping for clothes, don't like dressing rooms, and don't own a full length mirror (which drives people crazy when they come over and want to look in my mirror and have to stand on my bed to see themselves in the short mirror!)
87. I love peppermint lip balm
88. I've never had a nickname
89. I am part of the 20% of the population who have photic sneeze reflex
90. If I could have one super power I would want the power to heal
91. I want to receive a real ceremonial mehndi
92. I bite my bottom lip when I am nervous
93. I played a fierce game of tetherball in 5th grade and could beat everyone, girl or boy in my school